I fumbled with my phone, that I had on speaker, as I tried to hang up and end my almost daily conversation with my parents. They only talk on speaker, so when I call them I do it too.I could hear them, but they thought I had hung up, as they too fumbled with their phone my mom said “that girl was raised right.”

I can’t remember a time I didn’t need my parents. Their help, their guidance, or advice.Growing up the youngest of 6 children, there was always something going on, people coming and going, constant movement.But mom and dad were always there. Always.

Mom was a stay at home mom, who also did daycare for local kids and grand kids.We didn’t have much money, but we never wanted for anything.My mom was always cooking, or baking, or sewing. I never had to wonder where she was, or what we would eat for dinner. When I needed prom dresses, or play costumes altered or created, she did it. When I began showing an early interest in doing hair and make up, she let me practice on her. She would even go model my work to the neighbors. I know now, looking back, I made her into a hot mess, but she never let on, and told me how much she liked it. Years later, when I had to take my State Board exam for Cosmetology,she was my model, helping me keep my nerves in check. When I got married and had my first son, I would call her crying, that I couldn’t figure out why my son wouldn’t stop crying. The more she tried to explain, the more upset I got. I heard her end of the phone go dead. Five minutes later, a knock on my door, at 10:30 at night. Mom. She walked in, took my son from my arms, pushed his knees to his chest( which she tried to explain to me how to do over the phone),he passed the gas, and stopped crying. “There” she said.”Now, get some sleep.”and she left.When my second oldest became obsessed with snowmen, she built him one about 12 inches tall, and kept it in her freezer, and would bring it out when he was there.She was there when , 3 months pregnant with twins, I was put on bed rest, I moved back home so she could take care of my two other young sons.She has always been here.

Dad was a hard working man. Until he became disabled and had to retire,when I was 9 years old. It changed everything, for the family, how we lived and how we viewed things. But even though he was limited, he still worked hard, and could fix anything you put in front of him.If there was a problem, he would always say ” did you tell them you know me personally?” and I believed it would help.He had this special car horn, that played all kinds of songs, including our school song. My dad would pick us up from cheerleading practice blasting the school song.I always knew when my ride was there.He would sit and draw with me for hours, something I still find comfort in.He would play his harmonica as we danced around the living room, singing the silly songs he taught. Songs I sang to my sons. He walked with a cane, but vowed to not use it as he walked his daughters down the aisle. 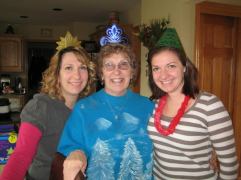 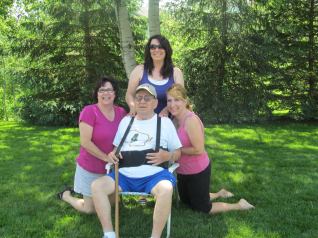 When the doctors suspected I had Multiple Sclerosis, I remember him saying” I wish it was me instead of you.” Because he couldn’t fix me, and that killed him inside. When he had to be put on dialysis, and eventually get a kidney transplant, he fought back. Surgery after surgery. He was still here.

“I just really want to thank you and Mark for always helping. I feel so bad that I can’t do these things myself anymore.” my dad said to me as we talked on the phone. My husband and I try to visit a few times a month. Usually there is a list of things they need our help with. So we help, because we want to, because they need us now. Hearing them being so appreciative, is a bonus, but not necessary. They were always there when I, we, needed them. Fumbling with the phone, trying to hang up, I heard her say “that girl was raised right”….yes mom I was.